But with the emergence of 5G, you might be thinking, “What about those amazing 4G GPS tracking devices I just bought?”

The GPS tracking devices or sensors you attach to your assets are useless without a way to communicate the data they collect – whether that’s location, temperature, on/off status, etc.

Cellular IoT connects devices using existing mobile networks, which makes a lot of sense considering 95% of the global population lives in an area covered by at least a basic 2G network.

Most IoT and GPS devices, especially those installed on assets that don’t move very often, do not require the same speed or bandwidth of consumer cellular devices, which transmit huge, rich packets of data. Cellular IoT networks, then, transmit small packets of simple data periodically, for example, the GPS coordinates of an asset once a day.

So, when we talk about our 4G GPS Tracking device range, we are referring to Cellular IoT networks, specifically LTE-M and NB-IoT, which were originally introduced as part of the 4G-LTE specification back in 2016. Cellular IoT networks are low-power, wide area networks (LPWANs) that enable extremely long battery life, better coverage and range, and low-cost hardware and connectivity options.

The latest news is that both 4G LTE-M and NB-IoT networks are now formally recognized as 5G technologies, which means the networks, and our LTE-M / NB-IoT devices will be supported long after 4G network shutdowns (which aren’t anticipated for quite a while). 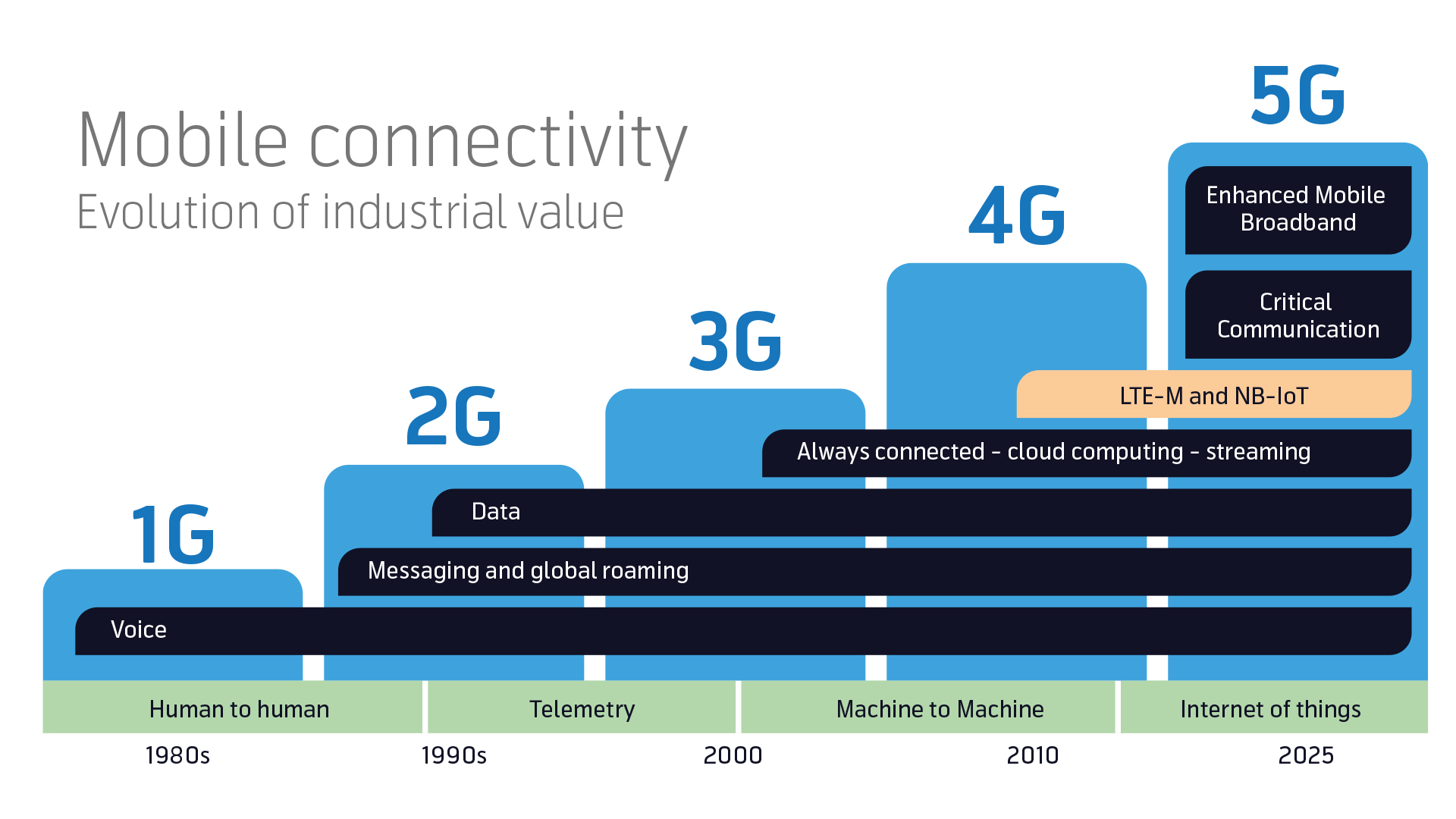 Image: From 2G to 5G: The history of mobile connectivity

For a more in-depth look at evolving LTE specifications, we suggest you check out GSMA’s article on Mobile IoT in the 5G Future.

What’s the difference between LTE-M and NB-IoT?

So now that we know LTE-M and NB-IoT networks are here to stay for the foreseeable future, what are the differences between the two?

Both LTE-M (often also referred to as Cat-M1) and Narrowband IoT (NB-IoT) are Cellular IoT networks used specifically for Internet of Things and Machine to Machine (M2M) applications.

Data Transfer Rate – As a result of NB-IoT’s narrow bandwidth, the maximum data transfer rate is around 250kb per second. The data rate on LTE-M is about four times faster – up to 1Mbps.

Range – Both networks provide excellent range and penetration, particularly when compared to 2G or 3G networks.

Power – An NB-IoT modem uses slightly less energy to transfer data than an LTE-M modem. But because of NB-IoT’s slower data transfer rates, uploads take longer than LTE-M. So, power consumption on either network is similar and very low.

Firmware Over-The-Air – Device firmware can be updated remotely over-the-air on both networks. However, larger OTA updates on NB-IoT may result in substantial power-use given the network’s slow transfer rate.

Because NB-IoT devices operate on a smaller bandwidth, the devices themselves are also less-complex and often more affordable to produce: Simpler antennas and less complicated firmware cater to the ability to install and operate hundreds, if not thousands of devices affordably.

LTE-M, then, is better suited for tracking vehicles, trailers, equipment, cold chain monitoring, or other tracking applications where assets are frequently moving, and greater volumes of tracking data is required. 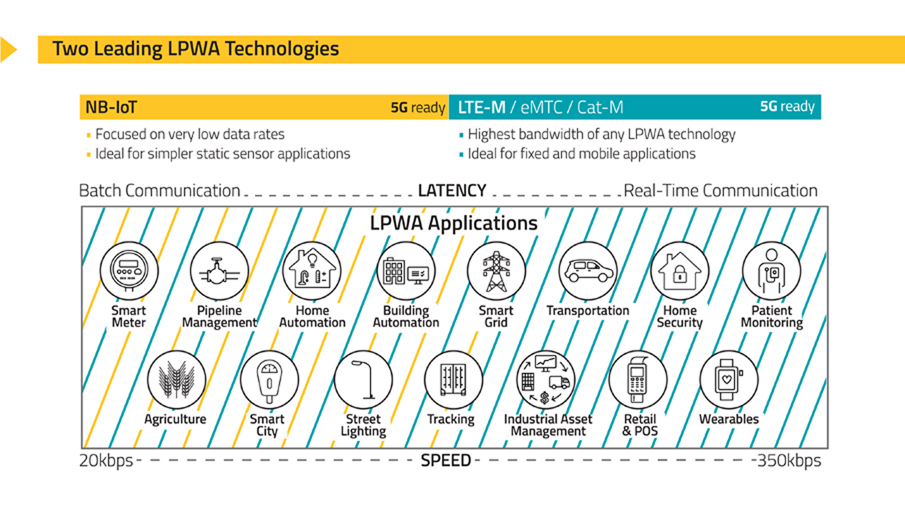 Image: LTE-M vs. NB-IoT: What are the Differences?

As of August 2020, GSMA reports 43 LTE-M Networks and 96 NB-IoT Networks across the world. You can check NB-IoT and LTE-M Cellular IoTdeployments in your country here.

Our experience as of August 2020 with both networks can be summarized as:

LTE-M on the SIM’s home network: Highly confident and very well-proven.
LTE-M with a roaming SIM: With the right Access Point Name (APN) settings, confident, and well-proven.
NB-IoT on the SIM’s home network: Experience varies greatly between networks and regions. Significant testing should be completed before deployment.
NB-IoT with a roaming SIM: We have not seen this work yet but hope to have an update soon as network roaming agreements progress.

In deploying thousands of LTE-M and NB-IoT devices, we have found LTE-M to be more mature and better supported globally. In the US, AT&T coverage has been reliable and extensive. In Australia, Telstra coverage has also been reliable and extensive. In both the US and Australia, LTE-M has proven to be a suitable replacement for 3G, and we confidently supply devices for use on both networks.

We have had varied success with NB-IoT, specifically facing challenges around standards as operators continue deploying their networks. In fact, we recently released new firmware and a Wired Provisioning Tool to simplify NB-IoT deployments. Europe is the primary driver for this technology, and each territory has different challenges. Global roaming SIM cards are more popular in these regions, and these also pose a variety of technical challenges.

NB-IoT roaming has also not proven successful, so using a ‘non-home network’ SIM is risky. Roaming triggers NB-IoT network scans, which are very battery intensive, and can be costly in applications where battery life is important.