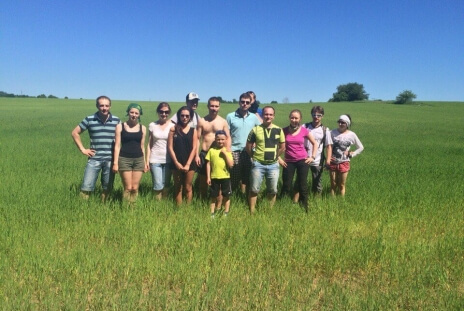 The first month of the summer 2015 is coming to an end. Unfortunately sometimes it was rainy, unlike the atmosphere in Gurtam where the sunny mood has constantly been with us. The recipe for happiness is quite simple: you need to take a professional holiday, add a little bit of corporate party, sweeten it with young children and to mix, adding a bit of innovative ideas.

The first idea is inspired by the International Children's Day. Celebrating the holiday, for the first time in the history of Gurtam we held an action of planting trees by our employees’ children.

The kids did their best: everybody was trying to do something good for our city. Although the shovels were large and the buckets were heavy, the children worked very hard, watered the trees and of course took pictures with great pleasure.

Gurtam’s staff is still young; therefore the alley has only 9 trees yet. But we believe that in the nearest future there will be a blooming garden in front of our office, because children are our future, and they alone are able to remind us that life is in everything around us.

Further to children's activity the company management decided to support the idea of establishing the Telematics School for employees’ children during the summer vacation.

Throughout June the kids did not get bored in the office and did not distract employees. We organized a bunch of activities especially for them: excursions to the Museum of the Great Patriotic War, lessons of theatrical art, horseback riding and shooting in the lasertag. In order to keep fit a trampoline appeared in the office, which by the way was tested not only by children but their parents as well.

At parting children, disguised as monsters, went from office to office and took the victims to their lair, which miraculously turned into a concert hall. There we could listen to English poems, the Beatles’ song "Yesterday" sung to the accompaniment of dulcimer, watch mini-skits and lively dances. Children are cute and there is nothing to add.

It’s noteworthy that during the Telematics School no child and almost no office were hurt.

June will be remembered as a professional holiday ‒ the Satellite Monitoring Day, celebrated on the 2nd of June. A "secret quest" for employees was organized, which could be passed with the help of Wialon, using GPS Tag app in particular.

"Field" players performed tasks and sent photo reports to the "headquarters." Those in the headquarters received new tips and provided further coordinates for the team. As a result, the participants, having run on terrain and passed through all the mini-quests, wrote the word "Gurtam" with the tracks.

The fastest teams got a well-deserved reward, and all the participants and fans had an opportunity to recover their energy with a pizza in the kitchen.

The game was funny, exciting and delicious. So once again congratulations on the holiday and let’s have a great monitoring!

The next pit-stop ‒  cycling with Gurtam. On Saturday, June 6 the traditional cycling season was opened. All together we managed to ride about 48 km around Vileika lake.

Biking was far from just a "walk", but rather a physical challenge. Surrender was impossible because the grown-ups had their children riding next to them. More over the kids were not merely riding, but set the pace! It doesn’t matter that all the muscles hurt tremendously for the whole week afterwards and everybody was sick of bikes, but it was really worth it. Sport really brings people together!

At the end of the bike ride we had a delicious barbecue and those who were still capable could also play volleyball.

Thus June with Gurtam was active and exciting, and that is the secret of our solar mood. July is almost knocking on the door and it will also be hardly boring.