New generation of the Eurosens Difference onboard weighing system from Mechatronics

The Eurosens Difference onboard weighing system, based on the new intelligent Eurosens axle load sensors, has become more compact and received new functions. 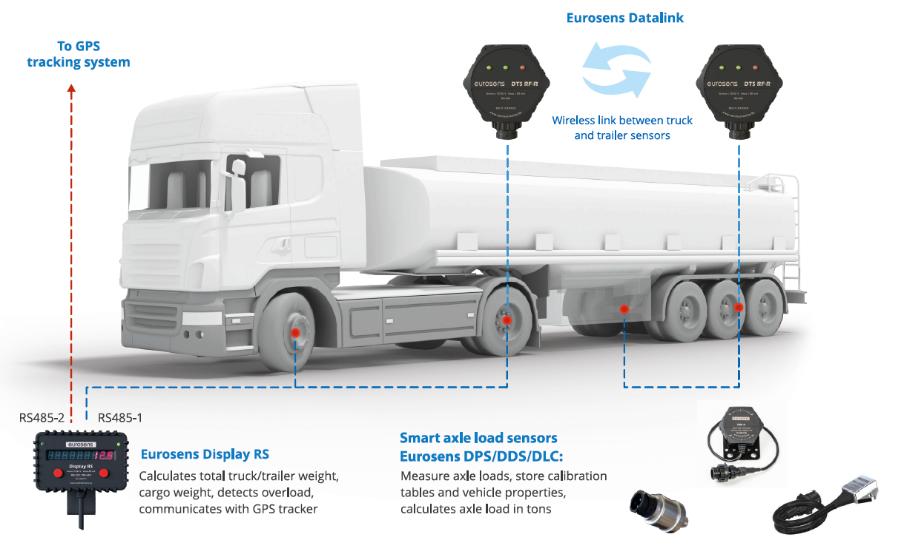 We got rid of the intermediate Difference-T controllers: all their functionality has now been transferred directly to sensors with an integrated processor and a digital RS485 bus. This became possible thanks to the development of axle load sensors from scratch.

Each of the sensors is able to convert the sensor signal into kilograms of axle load, and also stores the geometric parameters of the car and trailer. The axle load can be transferred directly to the GPS tracker via RS485 / CAN interfaces.

To transmit information from the trailer sensors, either a special coiled cable or a Eurosens Datalink radio bridge (only for RS485 bus) can be used.

What is the difference between the Eurosens Difference Onboard Weighing System and a set of sensors?
From a hardware point of view, the system additionally has an on-board driver display.

The need to display the weight of the transported cargo requires all calculations to be done onboard. Therefore, the on-board weighing system Eurosens Difference differs from the set of Eurosens sensors in the following functions:

Thus, a set of individual Eurosens axle load sensors turns into an on-board weighing system only by adding Eurosens Display RS and this is necessary in the following cases:

At the same time, you can retrofit the on-board kit with a display at any time, since the Eurosens DDS / DPS / DSS sensors themselves are no different from the serial ones.