NB-IoT and LoRa, who has more advantages

With the rapid development of the Internet of Things, higher requirements have been placed on wireless communication technologies. LPWAN (low-powerWide-AreaNetwork), designed for low-bandwidth, low-power, long-distance, and massively connected IoT applications, is also rapidly emerging. Among them, NB-IoT and LoRa are typical representatives and two of the most promising low-power WAN communication technologies. Therefore, some people in the industry often compare these two technologies. So, who is more advantageous for NB-IoT and LoRa? Let's take a look!

Development status of LoRa and NB-IoT

With the rapid development in recent years, LoRa and NB-IoT have made great progress in wide coverage. NB-IoT has already completed coverage of more than 300 cities across the country, and the number of terminal connections has exceeded 50 million. It is increased by tens of millions of grades every year, covering industries including smart cities, environmental protection, agriculture, medical care, and logistics.

LoRa is also blooming more in the country. LoRa, a technology that emerged earlier than NB-IoT, is also receiving attention from some vertical industry markets. At the same time, some Internet companies have chosen to promote the development of LoRa technology, with the intention of using LoRa technology to open up new roads for IoT.

Nowadays, both sides need to find new growth scenarios, and the smart home and industrial Internet markets are in the ascendant. Whether the market's future development breadth or depth is worthy of development of various technologies. Therefore, who can occupy the market leading position, be able to obtain more support from the industry chain, and form a more complete ecosystem, will be able to achieve greater success in the future.

LoRa and NB-IoT, both of which are wide-area Internet of Things technologies, have inherent advantages in such short-distance coverage scenarios, covering a wide area, low power consumption, a powerful management platform, a rich variety of terminals, and a large number of industrial chains. Downstream support.

The IHSMarkit report pointed out that the LPWAN market segment, which was once widely open, began to shrink significantly, but it is still in its early stages of development. In 2018, only 150 million LPWAN links were deployed. By 2023, LoRa and NB-IoT are expected to occupy 86% of all LPWAN links. LoRa may gain more private network adoption, while NB-IoT is mainly used. Applied to public networks. 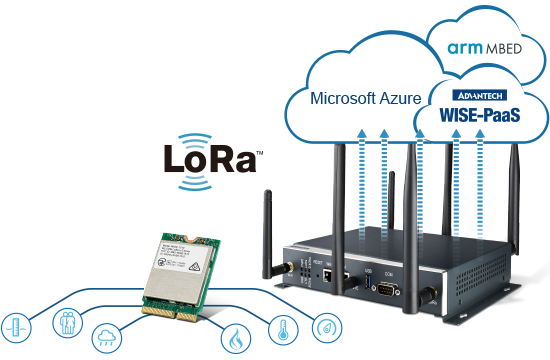 Comparison of NB-IoT and LoRa

NB-IOT and cellular communication use the licensed frequency band provided by the operator. Because it is a specially allocated frequency band, the interference is relatively small. Although the actual application will charge a certain communication fee, the corresponding will provide better. Signal service quality, security and certification. Moreover, the completion of the current cellular network base station is more conducive to rapid large-scale application.

NB-IOT signal coverage depends on its base station density and link budget. With the previous resource advantages, it can achieve wider coverage and better QoS than LoRa, and NB-IoT itself has a link budget of up to 164dB. Its transmission distance can reach 15km～20km.

LoRa uses linear frequency modulation spread spectrum modulation technology, which not only maintains the low power consumption characteristics like FSK (Frequency Shift Keying), but also significantly increases the communication transmission distance, thereby improving network efficiency and anti-interference ability, that is, different spreading sequences. When the terminals transmit simultaneously using the same frequency, they will not interfere with each other. Based on this, the gateway developed by the terminal can realize multi-channel parallel data reception and greatly expand the network capacity. The transmission distance of the LoRa node can reach 12-15km coverage (the open suburban environment, the urban environment transmission distance will decrease).

Low power consumption is one of the core indicators of the Internet of Things. There are two important factors to consider the protocol content and node current consumption in terms of battery life.

The nodes of the NB-IOT synchronization protocol must be networked periodically. The required "peak current" is several orders of magnitude higher than that of LoRa with nonlinear modulation. Especially in the process of requesting the base station to access the server after waking up, there will be A large amount of battery power consumption.

LoRa is an asynchronous communication method based on the ALOHA protocol, so it can accurately set the sleep time according to the specific application requirements, so as to fully utilize the battery power.

For the terminal node, LoRa is simpler and easier to develop than NB-IOT. The protocol and modulation mechanism of NB-IOT is more complicated, requiring more complicated circuit design and more cost. At the same time, NB-IOT adopts licensed frequency band. Communication requires a fee.

Through the above analysis, the biggest difference between LoRa and NB-IoT is that NB-IoT works in the cellular licensed band, and the network is deployed and maintained by the operator. In order to ensure normal communication and work with the base station, it is necessary to The product is effectively validated before it is actually deployed.

At present, both NB-IoT and LoRa are still in the initial stage of development, and all parties need to invest and develop together. When large-scale deployments are possible, the cost of modules for NB-IoT and LoRa will be further reduced. As far as the technical solution is concerned, in a short period of time, NB-IoT and LoRa will definitely be in parallel. Each has its own advantages and disadvantages. It is difficult to say who is overwhelming. However, if it is affected by factors other than technical solutions, such as the innovation of profit model. With the close integration with the application industry, with the influence of the industry, both of them may take the lead in occupying the market.

Share:
Latest news
22 September, 2022How can the safety of the cargo and the driver’s life and health be ensured without additional peripheral devices?
20 September, 20229 tips for using CAN Scanner tool by Galileosky
9 August, 2022ATrack unveils AK300 LTE vehicle tracker for upcoming 4G migration
8 August, 2022A joint Teltonika Telematics and Teltonika Networks passenger counting solution
All news