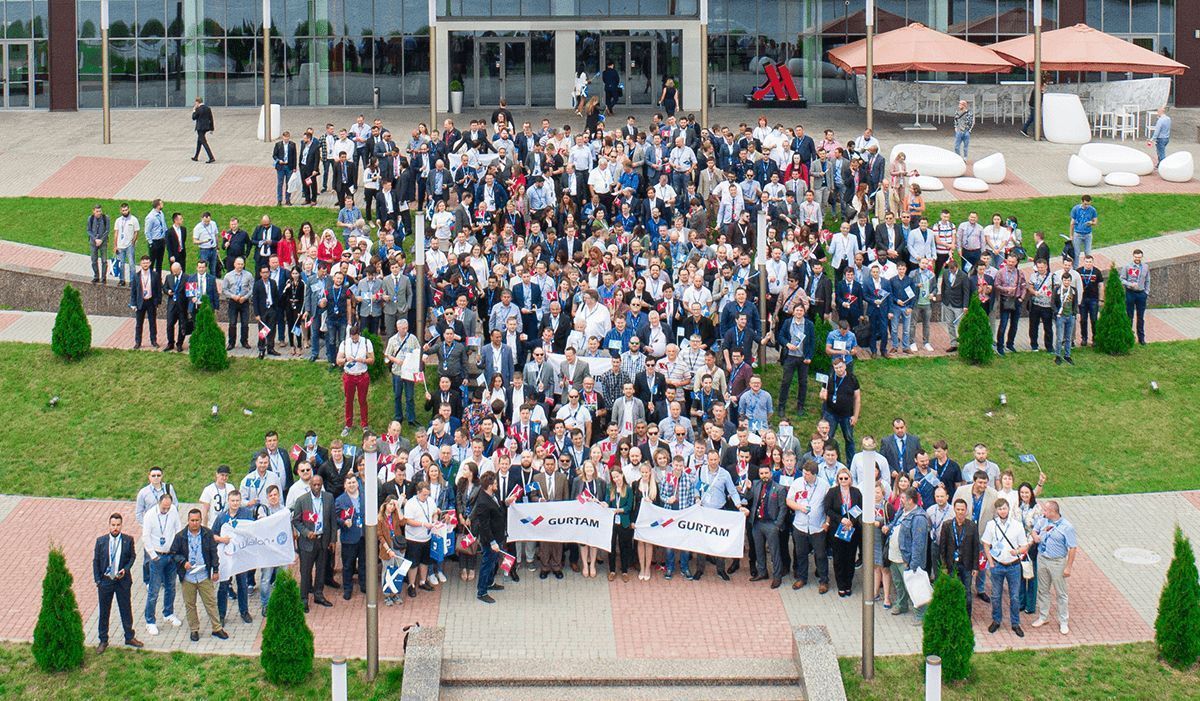 Today we are going to talk about the Wialon partner community’s accomplishments for the last 10 years. It’s hard to believe that the unique community of telematics and IoT professionals is already ten years old, isn’t it?

For a decade, we have been coming together in Belarus annually, and we already know the dates for our next grand get-together, Telematics Minsk 2020! But before we get down to organizing another fabulous conference, let’s look back and realize how much we have already achieved together.

Last year, we hosted TelematiX, the 10th anniversary Wialon partner conference, which brought together over 560 telematics and IoT experts from all over the world. It was the most massive partner event so far. But a decade ago the community was in an infant stage of development.

The idea of holding the conference and creating the partner community came to Aliaksandr Kuushynau, Сhief Wialon Officer, after he took part in some international events (including political ones). The informal part there was, as a rule, even more fruitful than the official one. 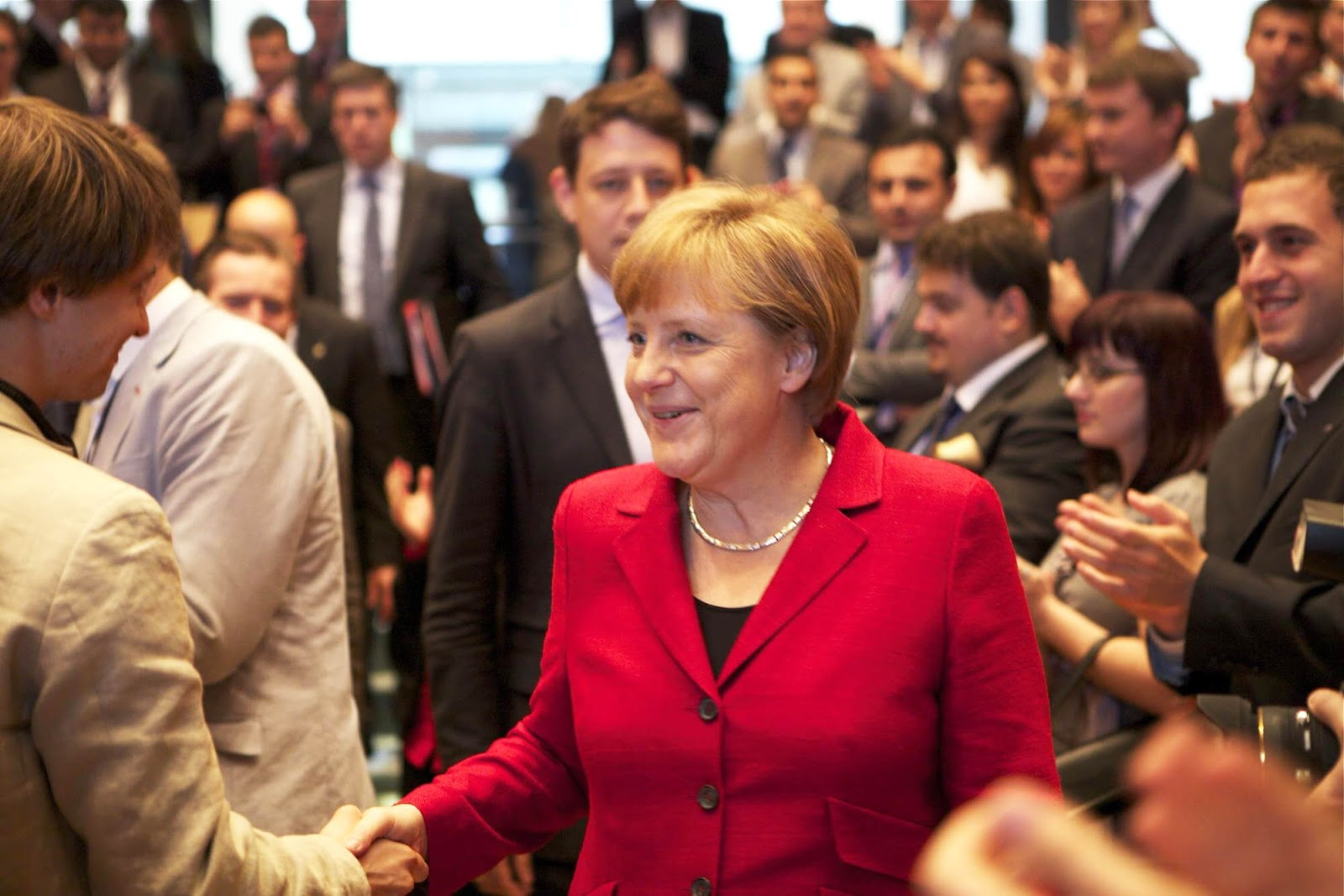 This experience made him think that maybe Gurtam can apply this concept and organize a similar event for Wialon partners. They would be able to communicate, share ideas and experiences there and eventually become a true partner community. And the time would show that it was indeed a brilliant idea. 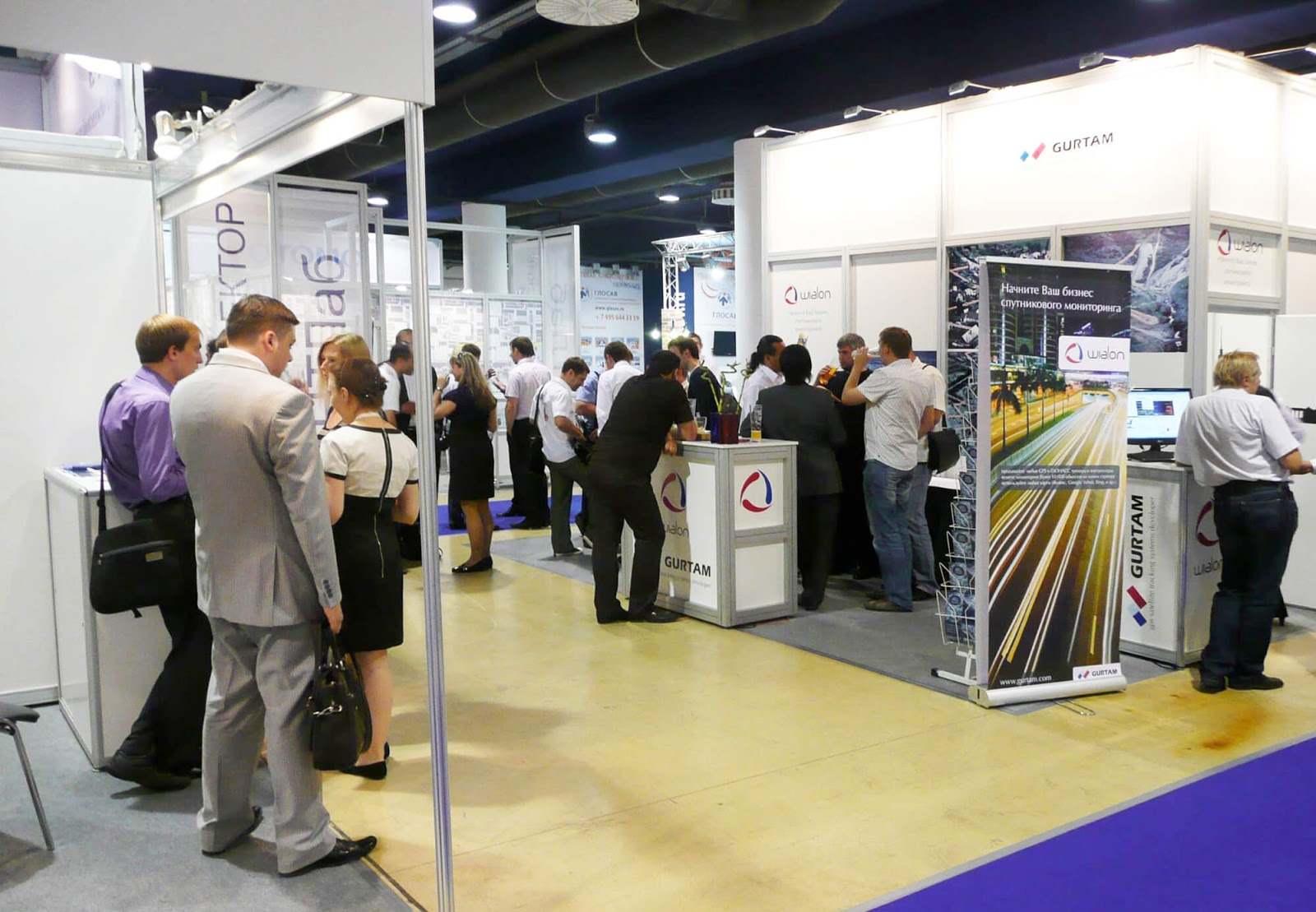 Expo in Moscow, long ago

Interesting fact: most of the partners signed the partnership contract with Gurtam after meeting us on numerous exhibitions or hearing good comments about the system from other service providers.

But there were those who believed in technology created by Alexey Shchurko, Gurtam CEO, long before Gurtam transformed into a global company. These people believed that a small start-up from Belarus could succeed, and they were right after all! 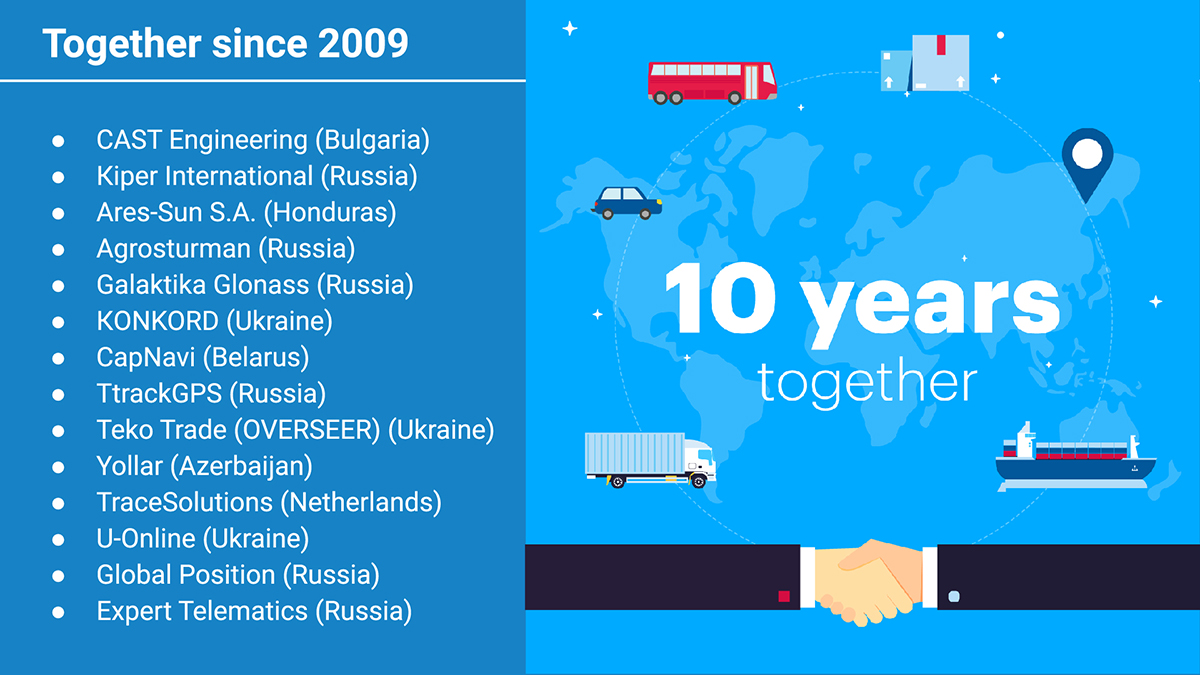 Companies that have been with us from the very start

Now, ten years later, we have:

Thanks to a few public companies on the market who publish their annual reports, we can compare our growth dynamics. For example, in 2018, an American provider of industrial IoT and M2M solutions Orbcomm, a company with its own satellite constellation, was ahead of Gurtam with 2,300,000 subscribers. In 2019, it grew by 17% versus Gurtam’s 35%. 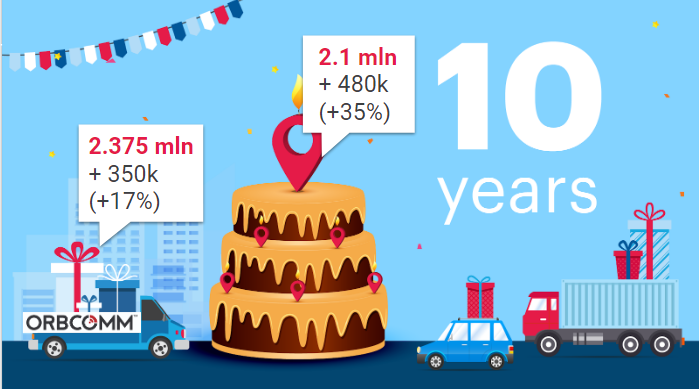 In 2019, we also achieved our long-anticipated 2-million-units milestone. To mark each step on the way to this number, we started honoring the companies that connected the next 100,000th unit. Meanwhile, let’s remember the lucky companies that have already imprinted their names into the Wialon history: 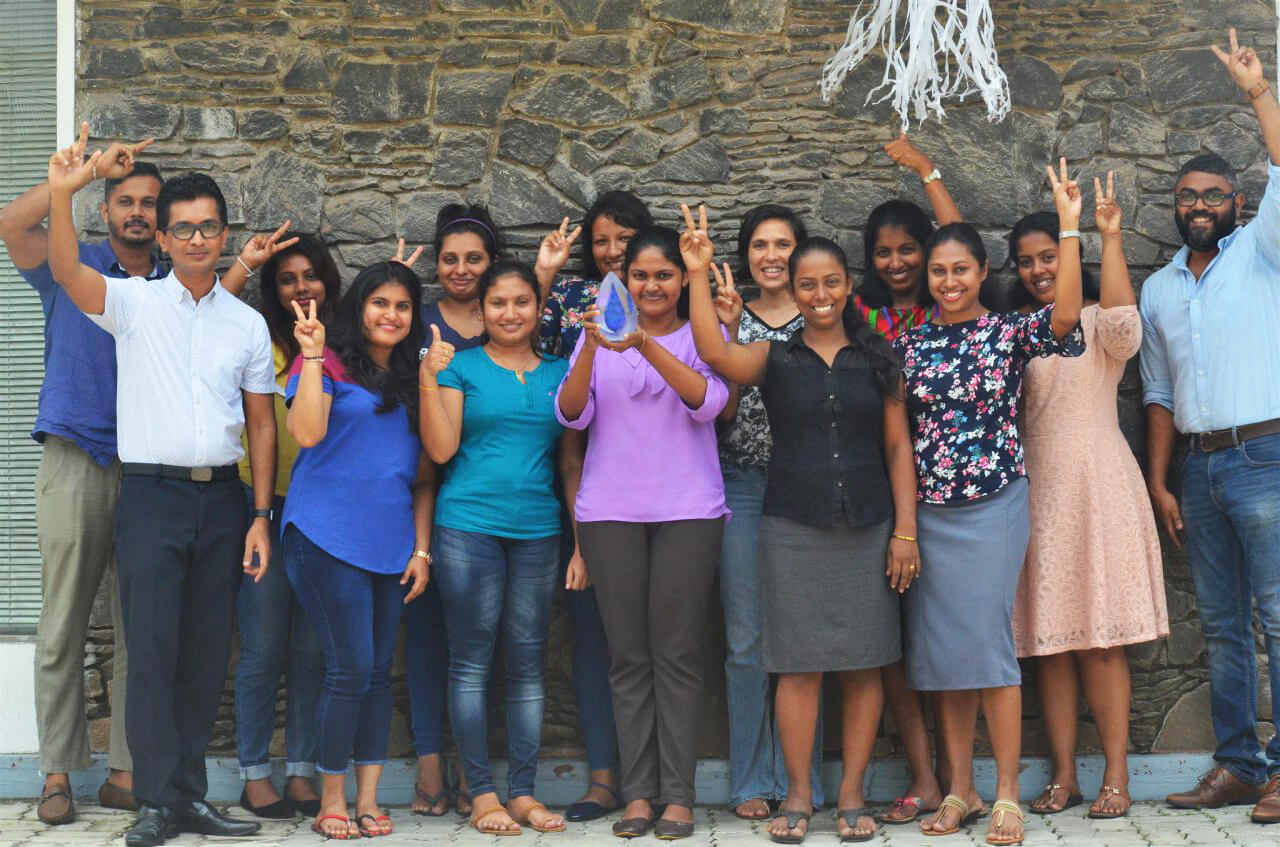 Wialon progress over the years

In 2010, we had only 30,000 connected units, while Orbcomm, for example, had more than half a million. At that time, our growth was around 300% per year: we were the industry pioneers offering a device-agnostic web-based monitoring platform.

Due to the rise of the GLONASS project popularity in Russia and our ability to satisfy the urgent demand for high-quality and affordable software, we reached the first 100,000 units on our platform already in 2011.

Further down the road, the number of new connections each year almost always exceeded the figures for the previous year. Not 300%, it would be just impossible, but the 30% growth is the steady result we keep getting until now together with a gradual increase in the absolute number of new units. 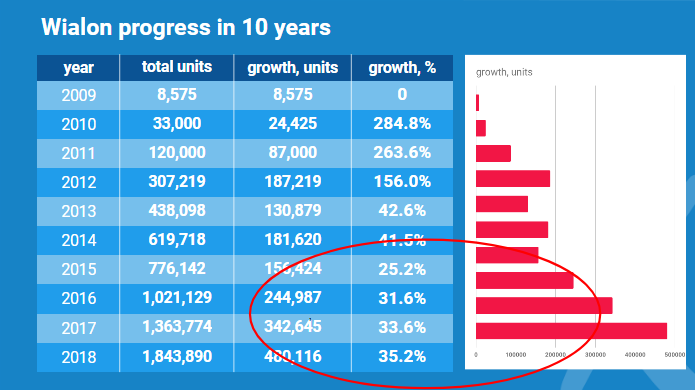 Wialon progress over the years

Geography of the Wialon community

The geography of the professional community covers more and more countries with each passing year. Unit connections are not distributed evenly there, of course. It depends on the business environment, the level of telematics market development in a certain region, etc. Let’s have a look at the general units distribution tendencies. 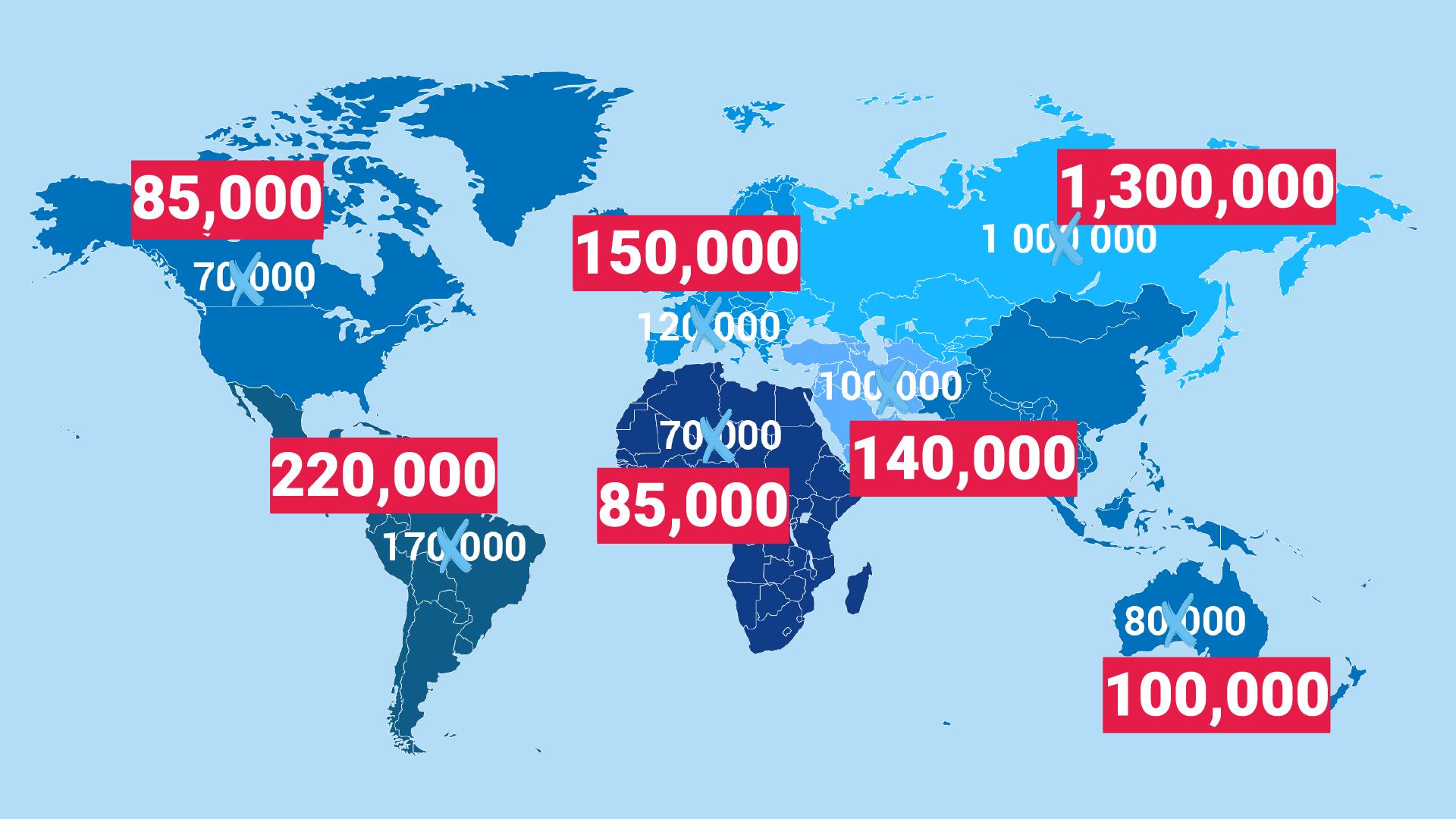 The number of units in each region as of July 2019

Going deeper into details by countries, we have the following results:

With regards to their GDP, population, the total number of vehicles, and the length of the road network, the three countries where we had the highest growth rate in Wialon units over the period of July 2018-July 2019 were Georgia, Moldova, and Kazakhstan. 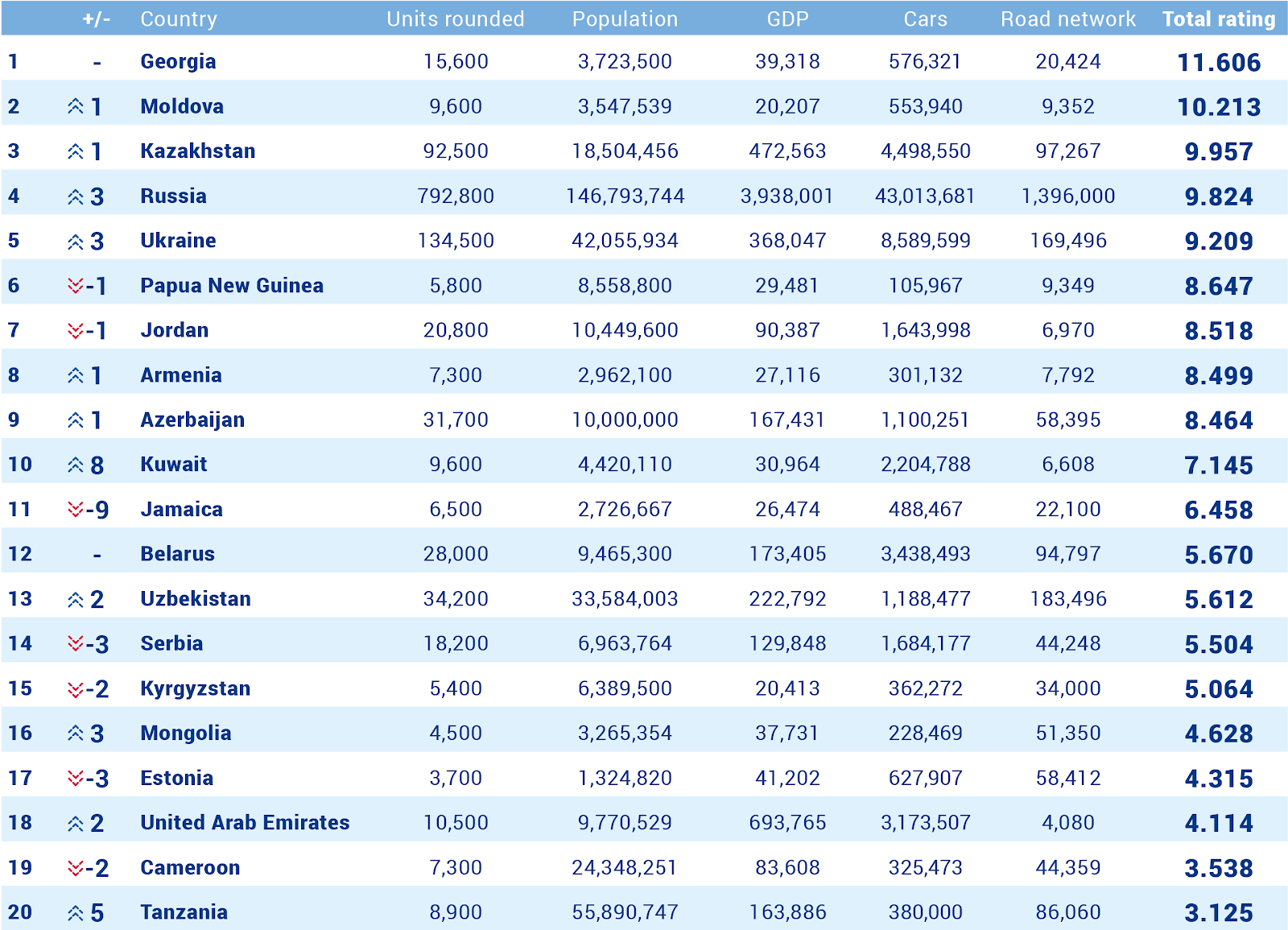 But we still have where to expand. For example, there are only 57 units in South Korea, 43 units in Pakistan, 33 units in Tunisia, 23 vehicles in Luxembourg.

Gurtam team and its organizational structure

Wialon progress is an important achievement for the entire Gurtam team – 230 people in nine locations around the globe. This is today’s Gurtam, but 8-10 years ago, everything was different and everyone was at arm’s length – Alexei Shchurko, Chief Gurtam Architect, replied to messages himself and consulted people on the forum and through emails.

But the more the team grows, the more we transform its organizational structure trying at the same time to preserve the spirit of a startup which is so inherent to Gurtam and create an effective model of interaction for the company's departments and external communications with the partner community. 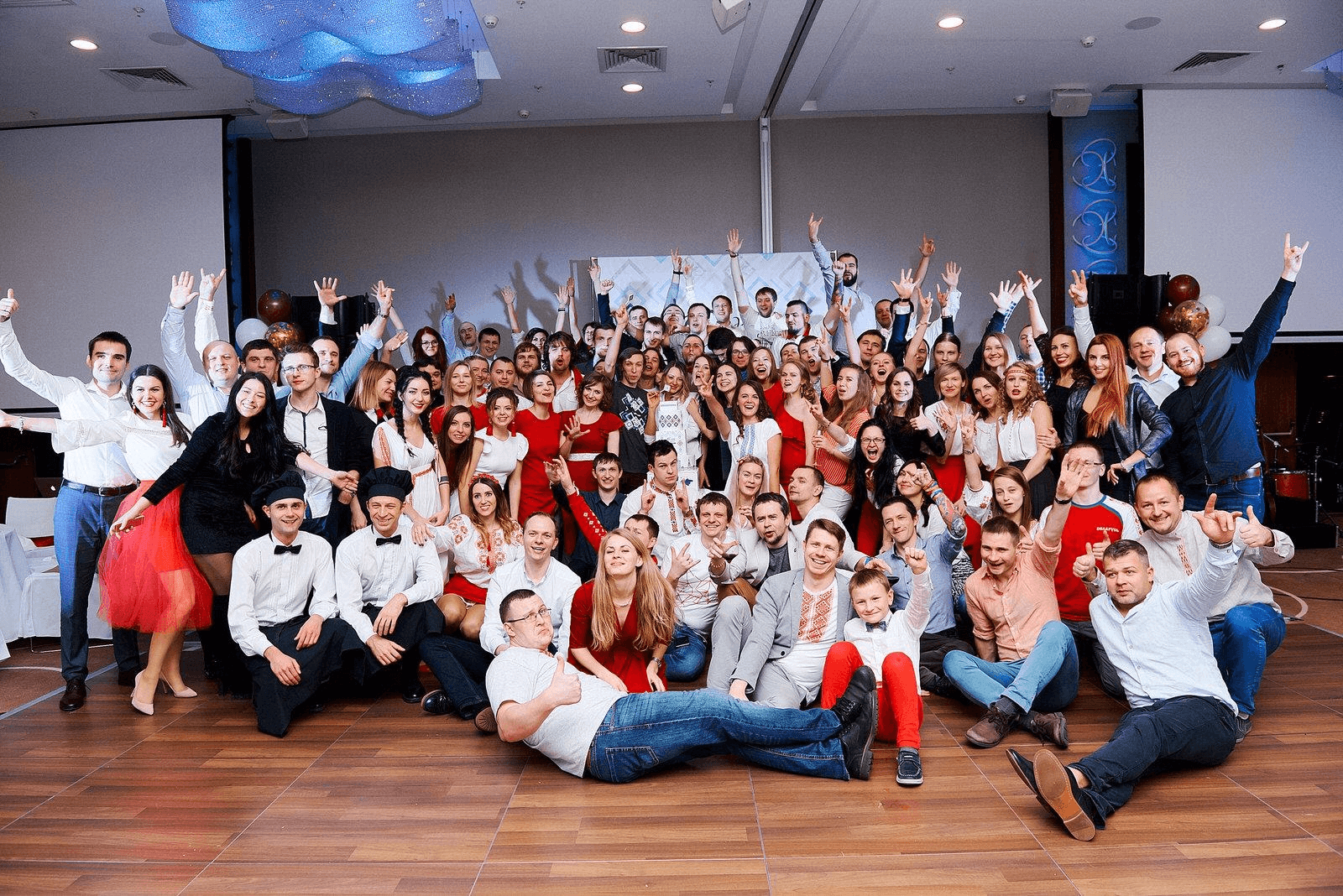 For example, our technical support department was split into two units: 24/7 service and technical consulting and training. Now, depending on the complexity of your question, it gets assigned to one of them. Simple questions that can be solved quickly go to 24/7 technical support, while more serious issues that require an in-depth analysis are individually processed by the specialists of a technical consulting or even hardware or development teams. 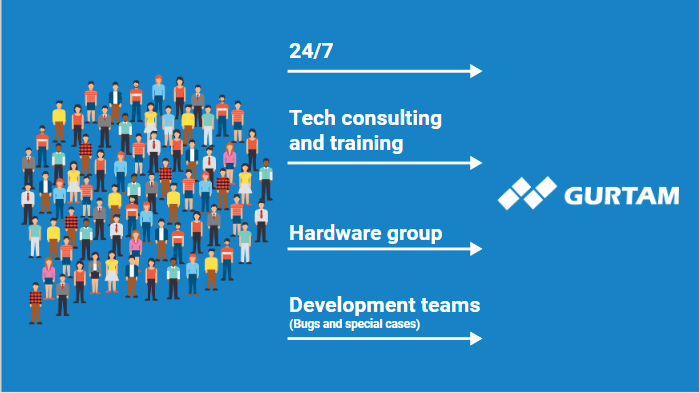 The format of participation in various industry exhibitions became a subject for reflection in early 2018. That was when we came up with the risky concept of upgrading from a regular exhibition booth to a large joint expo zone. As always, there is the history behind that.

At the end of 2017, Gurtam top managers wanted to extend our participation in MWCA for the next year. They were offered two options: to keep the same location which was not that good or to have a better one with the guaranteed traffic next to the ladies’ room.

Actually, there was an available spot ten times bigger between Verizon and Ericsson. With it, we were getting 150 square meters just for Gurtam (not that we needed so much space) and the $200,000 bill which was more than we could afford at the moment. And yet, we applied for that bigger area.

We had only four weeks to find the money and confirm the space, otherwise, we would reside in a small area next to the toilet. After just a couple of weeks, we got to know that the Wialon community supported the idea of the large joint expo zone and three companies (Pod Group, Assured Tracking, Golden M) had already signed up to exhibit together with Gurtam. In the end, the show turned out to be a blast!

From here on, we repeatedly used this concept in Moscow, Dubai, and Mexico, as well.

Fortunately, numerous co-exhibitors and thousands of visitors in 2018 and 2019, turned our exhibition zones into lively places full of positive emotions. So, 2020 will witness more IoT zones and innovative solutions shaping the future of the telematics market. 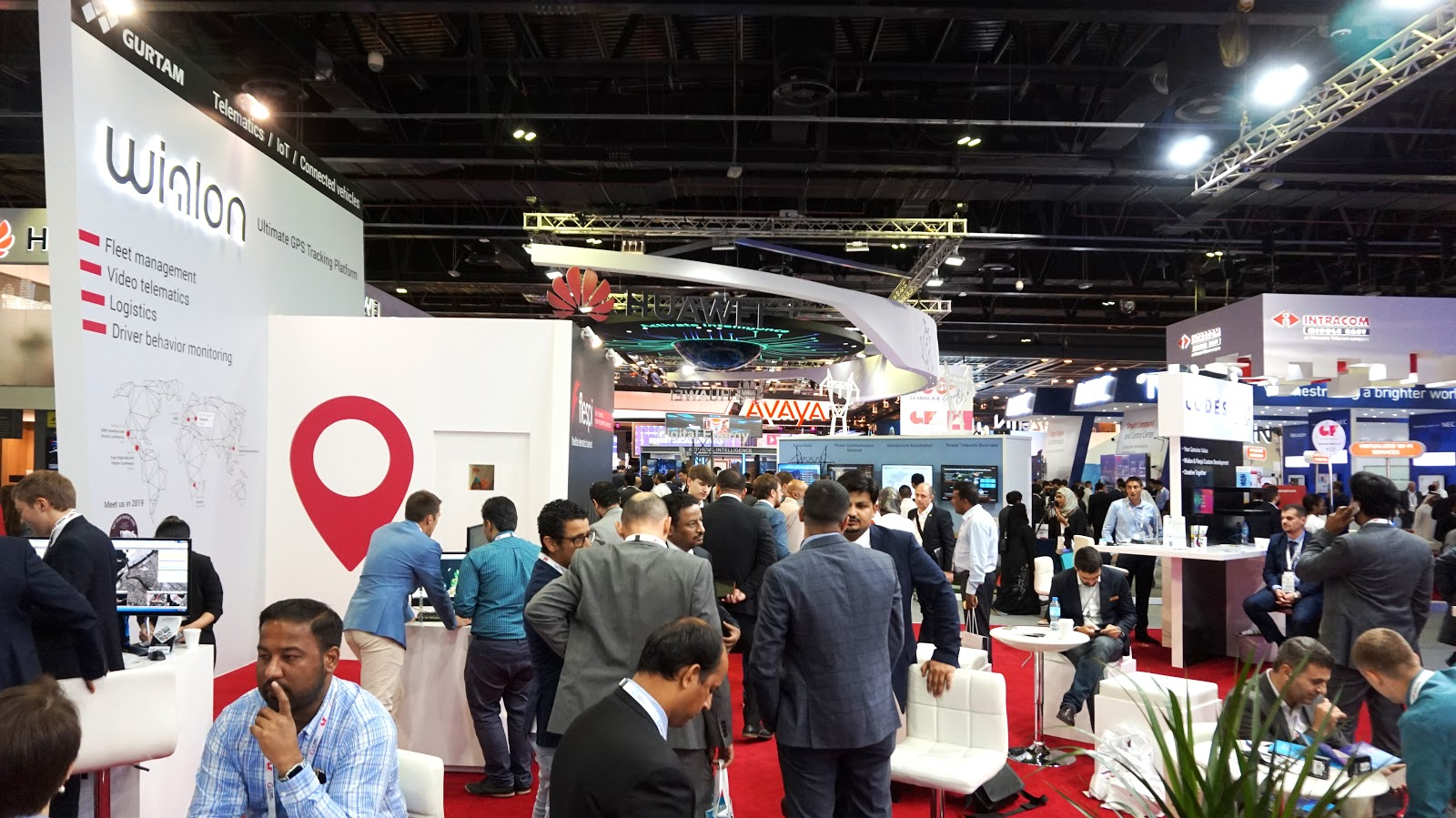 To cut a long story short – by February 2020, together we have reached 2,400,000 connected units and set objectives for the next few years.

Don’t forget to sign up for our newsletter so as not to miss other articles about the Wialon community, industry events, new success stories and not just that. By the way, registration for Telematics Minsk 2020 is due to open early in March. Follow our blog updates!

This article is based on Aliaksandr Kuushynau’s (Head of Wialon Division, Gurtam) keynote at TelematiX 2019. Feel free to watch it and other presentations by Gurtam team members in the playlist. 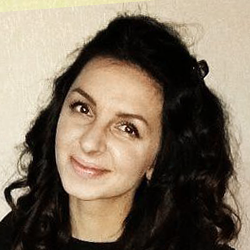 Alexandra Solonaya
Alexandra is the contributor to the Gurtam blog. She creates all kinds of content to deliver value to the Wialon partner community via articles, use cases, and informational materials. 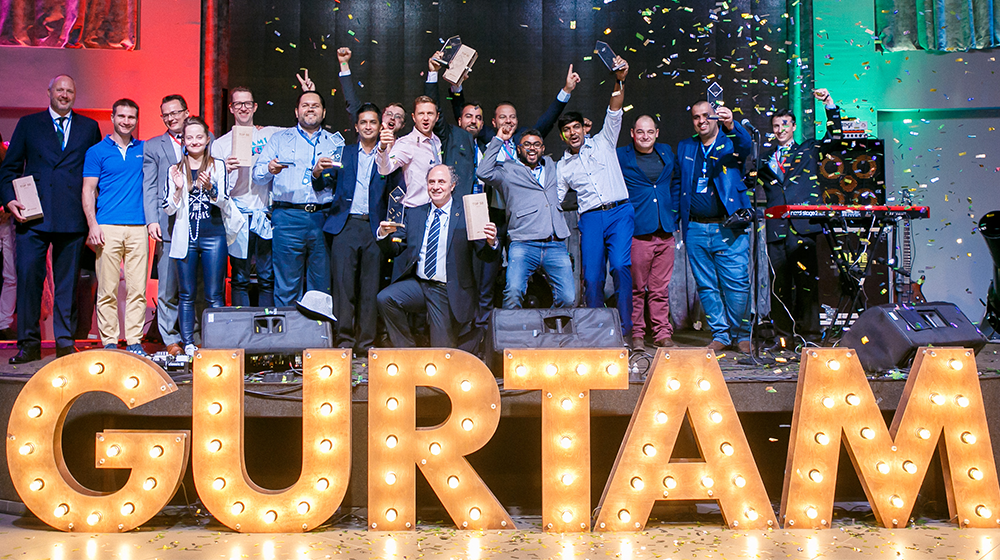